Here are the project proposals for FEAST #13. Each project somehow addresses this edition’s theme of Cultural Labor. Join us April 14th at the Church of the Messiah in Greenpoint, Bklyn and cast your vote for the one you think should receive a grant.

Ballet on the Barricades

A coalition of emerging choreographers is organizing to occupy public space and consider the movement of the 99%, celebrating the participatory culture of dance and demonstrating the power creative collectivism. Occupy Dance will manifest as:

§  Ballet Barre on the Barricades– a series of tutu making workshops and a ballet classes to live music, leading up to a mass morning warm-up class on May Day at the bull on Wall St.

§  Dance All Night – a ritual of holding space (TBD) with intention from sundown to sunup. A large circle marked by flowers is prepared the evening of April 31st and people volunteer to dance in the circle for each hour of the night.

§  The NYC Dance Parade – May 19th.  Occupy Dance is beginning to plan demonstrations, researching the emergence of modern dance in the 30s alongside the labor movement, and experimenting with participatory dance scores, including a moving People’s Mic.

§  Occupy Dance Movement Lab – where all these ideas start and develop, every Tuesday evening.

Funding supports the labor of the artists, rehearsal space rental, video and photo documentation, and outreach, with the smallest proportion going to physical materials. This is very exciting at a time when dance- the practice of occupying space, responding to shifting environments, self-expression- has largely been depoliticized. The American Spring can bridge the NYC dance community with political activists, and by founding a solid coalition, Occupy Dance can bring dance to new public venues in each of our NYC neighborhoods in the future. 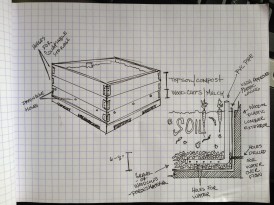 Feedback Farms transforms vacant lots and stalled construction sites into productive temporary farms. The economic downturn of 2008 left many developers unable to break ground or complete construction projects in the five boroughs. While in limbo, these lots often become impromptu trash dumps and rat warrens. Feedback Farms will take over lots at the behest of private landowners and public agencies, maintain and keep them clean, and grow vegetables while improving the aesthetics and safety of the neighborhood. The lots also will become a place for the community to gather, volunteer and learn.

To make mobile farming on small plots feasible, Feedback Farms is conducting research into utilizing labor and resources in the most efficient way. This season we will conduct field experiments, evaluating the labor inputs and yield outputs of growing vegetables in different types of mobile, sub irrigated planters (SIPs) and soil mediums.

These SIPs will have integrated remote monitoring capability and be equipped with tensiometers (moisture sensors), temperature and photo sensors to enable tracking of ambient light, moisture and temperature as well as location, planting date, variety, watering schedule, harvest time, and yield. We hope to learn which SIPs and growing mediums are optimal for urban farming. 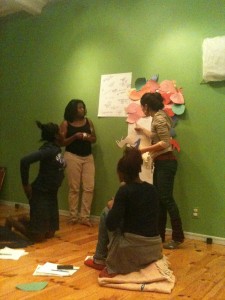 YFC is supporting the future leaders of the sustainable food movement, lending a problem-solution framework where youth can mobilize and envision change. We do this by connecting 15 NYC-based youth within a network of urban farms/gardens and non-profit organizations while raising awareness about systemic issues surrounding our broken food system. Youth of color, youth from low-income communities, and LGBTQI youth pay the highest cost for the inequities in our food system, and simultaneously aren’t granted any agency. Compounding the problem is the tokenization of youth and the constant use of a deficit model that lays blame on the youth instead of institutional power structures. YFC seeks to empower the next generation of workers so that they can become the next Speaker of City Council, Director of Just Food or Angela Davis. We need to value our youth and support them in eradicating institutionalized oppressive power structures that don’t value our working class, especially those that grow, harvest and process the food we eat.

Funding from a FEAST will enable us to move forward with our youth designed advocacy project, supporting the creation of a video PSA that will help the council reach out to their communities to advocate for better personal nutrition and access to fresh culturally appropriate and affordable produce. Through the use of art as advocacy, our council will spend the next 3 months filming and editing together a series of videos and voice collages that they can disseminate to friends, family, classmates and in their neighborhoods. 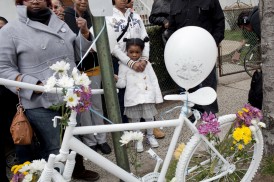 Since 2005, at the site of every crash where a bicyclist is killed, we install a Ghost Bike.  Bicycles are stripped of extraneous parts, sanded and painted white.  Each bicycle is installed below a silk-screened aluminum sign that bears the words: Cyclist Killed Here.  With this act, we make visible a tragedy that would otherwise disappear.

The physical construction of Ghost Bikes is laborious.  Because we only use bicycles that are otherwise too damaged to restore, parts are difficult to remove and rust is common.  Each Ghost Bike requires three cans of flat white spray-paint, one of primer, five sheets of sandpaper, three feet of chain and a padlock.  It costs, on average, $30 to construct one Ghost Bike.  Last year, the Ghost Bike Project installed 17 Ghost Bikes in New York City.

After seven years of constructing and installing Ghost Bikes, the project now has a critical lull in volunteers and funds.  We are at risk of fading away. The few remaining volunteers believe the only way to reignite the project is to gather the hundreds of people who have ever been involved with the project and brainstorm.  We propose bringing together the surviving families and friends who have had a relationship with the project, members of the bicycling community and past volunteers, for a public gathering this summer. With the assistance of outside facilitators and a survey for those outside of New York, we will invent ways to sustain this emotionally difficult and labor-intensive project. 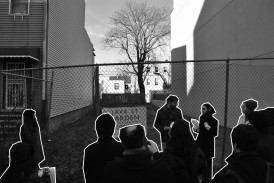 It has happened slowly. Many of us have not even noticed. Little by little, the cities we inhabit have become increasingly privatized. Yet many of us do not often stop and ask ourselves what we are losing in the process. What happens to democracy when we do not have the spaces to meet, organize, and collectively plan for our future? What happens when our city does not belong to us?

With these questions in mind, design collaborative DSGN AGNC organized a group of designers, lawyers, educators and citizens to launch #whOWNSpace. The project seeks to reveal and question the often conflicting rules that govern privatized public space, to advocate for changes when necessary, and to propose alternative policies, uses and designs for public space that encourages democratic vitality.

These observations on what privatized public space is doing to democratic involvement have lead #whOWNSpace to propose what we are terming a BLACKBELT. Evolving from the idea of a greenbelt, a BLACKBELT is a network of community-supported spaces that rejects the notion that public space can only be used for passive activities. Instead, a BLACKBELT seeks to create spaces to be used by local groups for physical engagement, organizing and production.

Phase 1 of this BLACKBELT has started to manifest at 59 Java Street in Brooklyn. We are redesigning this vacant, city-owned lot to become a public space where the Greenpoint community can reclaim and reshape the factors that are defining the social and material world they live in.

Hand in Hand: A visual guide to the Domestic Workers’ Bill of Rights 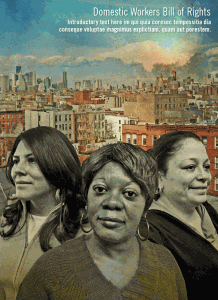 The Center for Urban Pedagogy (CUP) is collaborating with Domestic Workers’ United (DWU) and artist Damon Locks to produce an art-focused, visual guide that helps New York’s 200,000 domestic workers and their employers understand the recently passed law that gives workers new rights and protections. The guide will use Damon’s portraits of workers and domestic environments, along with text in several languages, to explain the law and provide workers with guidance on how to talk about them with their employers. Our goal is to use art and design to advance social justice in creative and impactful ways.

This project is already in the works, but we believe that FEAST’s support can help amplify its impact by increasing DWU’s distribution reach. We can afford to produce 1,000 copies of the pamphlet. With the assistance of $1,000, we can produce at least 2,000 more copies, allowing us to reach 3 times as many individuals within NYC’s communities of domestic workers as we would reach on our own. We will work with DWU to distribute them to as many workers in NYC as possible during their Summer campaign. We will work with CUP volunteers and DWU members to hand out the pamphlet in settings where domestic workers (who are decentralized by the very nature of their work) gather, such as playgrounds and parks and places of worship.
http://welcometocup.org
http://www.domesticworkersunited.org/
http://damonlocks.com/art/

MAY DAY RADIO: WE WANT THE AIRWAVES! (and the interwebs) 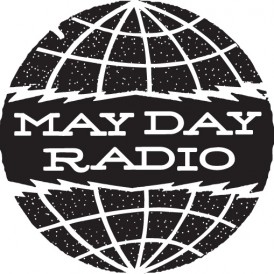 Occupy Wall Street is a much-needed movement for social and economic justice. But it’s also a community. On May Day, throughout the day, we’ll be all over the city marching, performing, striking, disrupting, exchanging ideas, getting arrested, making out, dancing, and taking the streets. But, we want the airwaves too!

A community radio station experiment, May Day Radio, will begin streaming live a few days before May Day to provide a coordinated voice—a source of information and inspiration as the day approaches. We’ll air interviews with organizers of actions and members of OWS to find out what they’re planning. Programming will include special guests, music, segments on the history and significance of May Day and voices from across our diverse community.

On May Day we’ll take the air! In addition to the livestream, using hacked ipod accessories, we’ll provide an FM signal, giving you the option to tune in at home or bring your FM radio along anywhere an action is taking place. You’ll hear live updates and tactical information on actions across the city as they unfold, great music, a host of speakers, call-ins, spoken love letters to Occupy from supportive luminaries, performances, and just a bunch of generally inspiring content. As the day’s events come to a close, we’ll converge with our radios and headsets to form a giant mobile dance party.

In the spirit of OWS, May Day radio is an imaginative way to claim space that should be ours but isn’t. Join us! Funding is greatly needed to secure FM transmitters, receivers, and recording equipment.

The Stoop Instrument Library is a community and space where musicians, non-musicians and youth can borrow, exchange and experiment with new instruments of their choosing. The Stoop makes learning an instrument accessible to anyone and brings collective local music back to the community.  We will reach out to musicians, venues, studios and artist lofts, creating a network of lenders and borrowers, and ultimately mentors and students; bridging the gap between music education and youth is our ultimate goal.

We’re close to losing culturally historic music and are sometimes even ambivalent to the existence of a collective musical movement around us.  By bringing down the costs and expertise needed to maintain instruments and acquire them for musical exploration The Stoop Instrument Library aids the community of professional and amateur musicians as well as interested youth.

Our goal for Phase 1 is to develop the initial instrument library network: build its community, an instrument database, enhance local musical culture and gain project strength and momentum for the goal of a physical space and active membership community.