Please preview the proposals for the FEAST #9 (Saturday, November 13).

We look forward to speaking with all of you. Good luck! 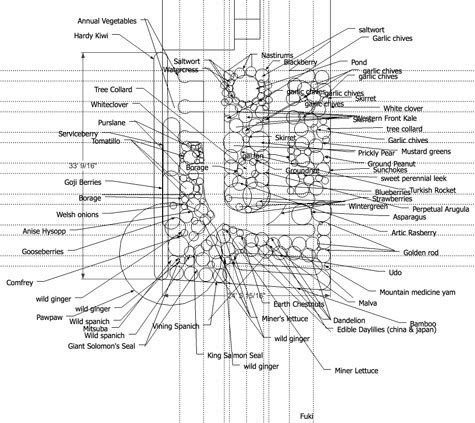 Forest gardens are traditional, sustainable, agriculture systems that are modeled off of forest ecosystems. Its main architecture is a multi-tiered canopy consisting of edible perennial and self-seeding plants, many of which are rare. Because of this, forest gardens are low maintenance systems that eventually become mostly self-sustaining. Users of these systems are foragers rather than farmers, a distinction that leaves the forager with more time to pursue other interests while still having a diverse, organic, sustainable food, fuel and medicine supply. Besides being beneficial to humans, forest gardens also increase biodiversity, rebuilds soil, and are carbon sinks.

I will implement a forest garden in the back and front yards of a property in Queens, NY. The grant will be used to secure these rare plants. Once the forest garden is established and thriving, I plan to give tours of the garden to create an exchange with the community. The ultimate goal for the garden is to serve as a local nursery where plants can be given away to others for their own home gardens. Over time, I hope it develops into a network where people can swap plants and seeds, breed new perennial vegetables; creating a more secure food source that is low maintenance and sustainable.

The Institute for Wishful Thinking: Artists in Residence for the U.S. Government (self declared) 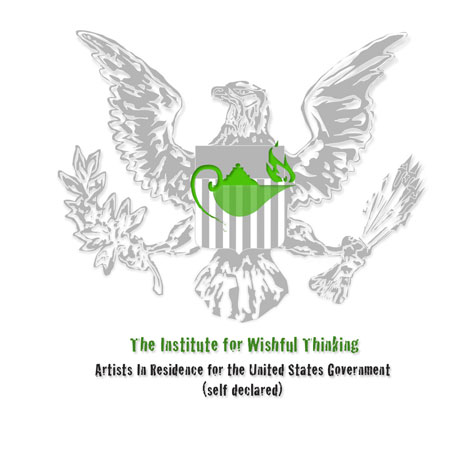 As self-declared Artists in Residence for the US Government, the Institute for Wishful Thinking (IWT) believes that artists possess untapped creative and conceptual resources that could be applied to solving social problems. With this in mind we invite proposals from artists for residencies at government organizations–federal, state, city or community.

Our website will provide information about how government policy is made along with links to a broad range of government agencies. At the next FEAST we will explain how artists can use our website to find an agency or organization to target with a proposal and to research how their interests might intersect with specific policy issues.

Submitted proposals will be distributed widely. In addition to posting them on our website we will publish a book in which they are interspersed with transcriptions from the concurrent debates and discussions we host at Momenta. FEAST funds will produce this book, which will then be used to generate interest and funding for a pilot version of the project—placing artists in residence with the agency or department of their choice.

Our goal is to develop a new model of support for artists by creating a structure in which they are paid to serve as consultants to policymakers, community leaders and elected officials. The publication will increase understanding of the art making process and how it can contribute to society as well as encourage policy makers and the general public to think of artists as potential partners in a variety of circumstances. 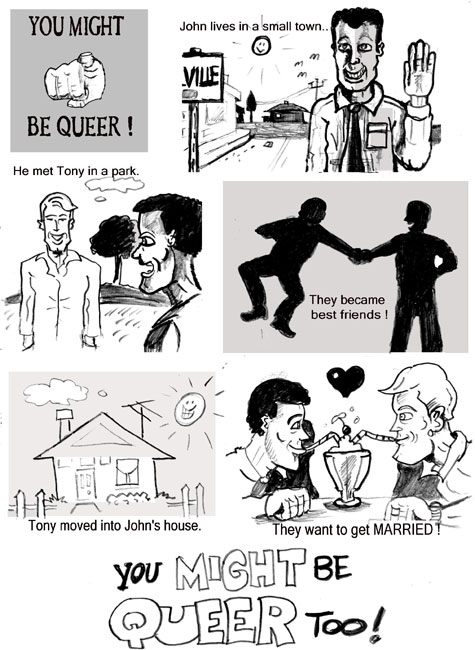 In response to the New York State Legislature’s denial of same-sex marriage to its constituents, Homopropaganda is an initiative that aims to change the systems that create injustice for the LGBTQ (henceforth Queer) community by promoting a pro-queer agenda through performance actions.

The ‘homosexual agenda’ is a term used by social conservatives to describe the advocacy of cultural acceptance and normalization of non-heterosexual orientations and relationships. The term is regarded as pejorative by many queers and queer organizations. The term is applied to efforts to change government policies and laws on Queer issues (e.g., same-sex marriage, Queer adoption, recognizing sexual orientation as a civil rights minority classification, Queer military participation, inclusion of Queer history and themes in public education) as well as non-governmental campaigns and individual actions which increase visibility and cultural acceptance of Queer people, relationships, and identities. The term has also been used by social conservatives to describe supposed goals of gay rights activists for which they themselves have never advocated, such as “recruiting” heterosexuals into the homosexual lifestyle.

This proposal is for the creation, printing, and distribution of printed materials (tracts) and artworks parodying the religious right’s portrayal of queers as recruiting heterosexuals into the queer lifestyle. In the the upcoming project performers will hand out ‘ Homopropaganda’ literature ala’ ‘Church of Latter Day Saints’ style…dress pants/skirt & white shirt and tie in pairs w names tags in key location throughout the five boroughs of New York City. Converted heterosexuals will give testimonials to how they have been saved from the depravity of the straight and narrow. 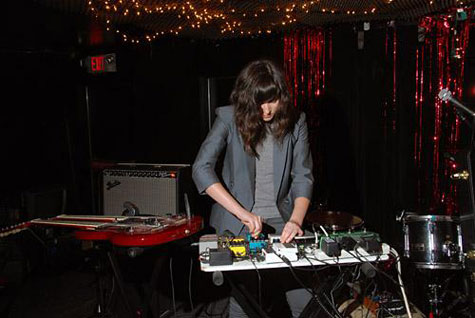 The Tom Tom Tour is more than just a concert, but a behind the scenes look at female drummers and beatmakers. A space for women to teach other women about the many ways they can be involved in music. The goal is to make it an all ages event that will host 3 performances to be accompanied by a demo facilitated by the drummer or beatmaker. The demo will take place before each performance and cover various topics from how to make drum triggers to drum tuning to making a beat. All demos are highly interactive with the goal of getting people talking to one another and learning hands on how to create. The night will be close out with a drum-centric dance party, where the audience is highly encouraged to participate by having percussion instruments available. The tour will hit all 5 boroughs to engage the broader NYC community and make it accessible.

We are requesting $900 as the seed money to launch the first event. The money will go towards:
Venue fee of approximately $250
Performance fee for each artist $100 totaling $400
Flyers and posters $100
Educational handouts $50
Drum trigger supplies $100

Last December, artists Geddes Levenson and Annie Blazejack made 12 paintings in 12 hours and sold them to benefit The Mali Health Organizing Project or MHOP – an organization dedicated to empowering urban West African communities to improve maternal and child health. The $1000.00 they raised opened a community-run clinic in Sikoro, Mali.

With help from FEAST, the artists will scale up the project this year, to 24 paintings in 24 hours. Responding to the themes and compositions in each other’s work, the two artists will engage in a 24 hour art dialogue.

The Marathon will be documented at www.artformhop.blogspot.com and online viewers will be encouraged to leave comments and offer inspiration, thereby enlarging the participating community. After the performance, the 48 paintings will be available for purchase on the website.

Money raised through the sale of works will be donated to MHOP. By empowering communities in Mali to create sustainable health programs, this project will bring the FEAST community into a larger discussion about how communities can interface to improve our world.

We hope to introduce a prototype for artists who want to help non-profit organizations by involving an ever growing community of artists in the realization of our project, starting with FEAST. 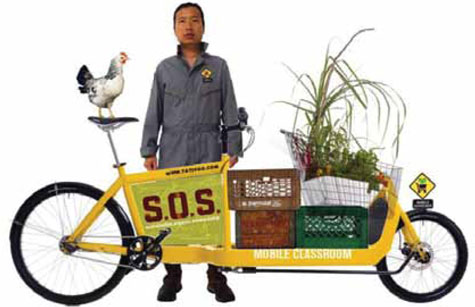 In Spring 2011, FarmCity.US seeks to convene a “Urban Agricultural Exposition & World’s Fair” featuring 12-15 urban farming methodologies and inspiring art projects under one roof. Modeled on World’s Fair Expo’s of yore, we would feature farming innovations, technologic spectacles, delectable foodstuffs and inspiring performances. At the most basic level, participants would wander among booths linked with a unifying design — displaying and demonstrating current and imagined urban agricultural practices. Presentations would include pragmatic offerings on such city farming techniques as beekeeping or mushroom innoculation alongside speculative projects such as Window Farms by Britta Riley or artistic interpretations, like S.O.S. Mobile Classroom by Tattfoo Tan. By juxtaposing the mundane with the sublime, we hope to inspire participants to see creativity and activism as essential elements in the sustainable growth of urban agriculture. We intend to hold the first exposition in Brooklyn, tentatively, at The Commons. Cooper Hewitt National Design Museum in Manhattan and Ecobatiment Centre De L’Environment in Quebec City have both expressed interest in hosting the travel of the “Expo.” Some revenue will be raised by a modest admission fee. However, we seek support from FEAST to defray administrative costs, artists’ fees, design & printing costs and art moving costs. FarmCity.US is an action-research project seeking to promote new visions for growing urban agriculture. FarmCity.US organizes interactive events and hands-on workshops that explore idealized or existing projects engaging urban farmers, activists, environmentalists, architects and artists. Recent examples of our work include Farm City Fair (brochure attached), Farm City Tours, Farm City Film and Brooklyn Utopias: Farm City. 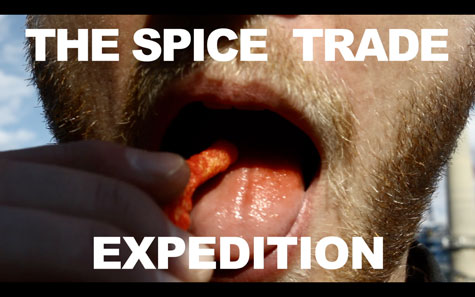 In search of the disconnect between ourselves, the natural world and the food we eat, we’re going to slip on some boots, strap on a backpack, grab a canoe, and head out into the industrial wilderness of the New Jersey wetlands.

Following in the footsteps of a Marco Polo-esque spice trade, our expedition will travel by canoe past massive cargo ships and factories in search of the numerous artificial flavoring factories of New Jersey, the flavoring capital of the U.S. During our two-week industrial wilderness trip, we will interview factory employees, document our campsites and adventures, and cook with various artificial flavors in an attempt to bridge our understanding of the natural and artificial. This will be edited into a documentary about our adventures and discussions that ensue.

Our expedition will be lead by NOLS mountaineer, Ryan Van Luit, and Jon Cohrs. Our support crew includes researchers, video editors, writers, a flavorist, a photographer, and most importantly a cook willing to work with Doritos and Tofurkey. While we are on the trip, there will be a live “war room” where the public will be following our path, aiding us with information about places we visit, potential hazards, and answering pressing questions.

The ultimate goal of the project is to create a documentary that investigates questions about the artificial flavoring industry in a manner that is entertaining, humorous, and insightful. Following the trip we will have an open invitation for artists, cooks, and those interested to join us for a 3-day canoe trip through the wetlands where an all-artificial thanksgiving feast will be prepared by the participants.

Preparing for a World Premiere Performance 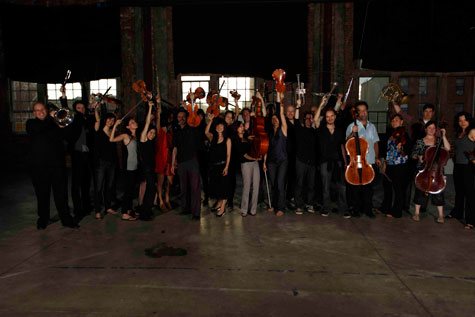 The Knights orchestra will invite its Brooklyn neighbors including young composers, the FEAST community, and local arts and religious organizations to participate in the artistic process of preparing a new piece of music for its first-ever performance. Students between ages 12-18 will be invited to submit a simple melody and the selected submissions will be orchestrated by composer Yotam Haber and performed by The Knights orchestra, effectively “premiering” an orchestral version of these original works. The winners will be invited to share their thoughts about the experience. Then, a cantor will sing some of the Roman-Jewish liturgical melodies Haber integrated into his own work, “New Ghetto Music,” as the composer describes his composition process. Members of the orchestra, the featured singer Christina Courtin, the conductor Eric Jacobsen, and the composer Yotam Haber, will all share their perspectives and answer questions from the audience, who will be invited to sit around, not just in front of, the musicians. The event at the welcoming Brooklyn Lyceum will connect people both familiar and unfamiliar to Classical music, and those young and old, to the creation of music and will ignite learning and creative ideas among its participants.

The Knights are a fellowship of adventurous musicians who cultivate collaborative music making and who creatively engage audiences in the shared joy of musical performance. Based in New York City, The Knights expand the orchestral concert experience with their diverse programming, innovative formats, and unique atmosphere of camaraderie that creates the intimacy and immediacy of chamber music.