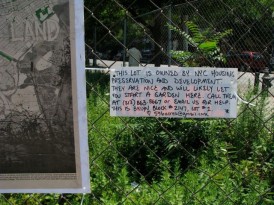 596 acres of vacant public land existed in Brooklyn alone as of April 2010 according to the City’s own data. We spent some of last summer distributing maps of where that land is and hanging physical signs identifying particular lots for those who walked by as an experiment (think alternative parks department…). People responded to our signs and we helped forge relationships between neighbors and help those neighbors negotiate with NYC agencies for permission to use previously closed-off land in their neighborhoods to for community-controlled green space and food production.

Six months after we started our experiment, there are four new gardens preparing to build their soil for a spring planting: FEEDback Farms, the Java Street Garden Collaborative, 462 Halsey Community Garden and Myrtle Village Green.

We are also getting ready for spring — spending the winter groundtruthing** the data we have from New York City’s Planning Department, preparing a new broadsheet that will tell the stories the community groups that successfully organized for control of green spaces in their neighborhoods based on information they learned reading our signs on the fences. These stories are the spark. A future of communities determining their own geographic destinies is coming.

We are also making new signs and talking to city agencies that don’t know us yet in order to figure out which lots we should label. We know that Brooklynites are prepared to be in charge of their destiny. We are laying the tracks. We need some rails. Or maybe just a FEAST.

Because you can’t. hold. back. spring.