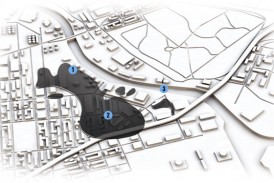 Mycoremediation is a term coined by noted mushroom researcher Paul Stamets, who discovered the enzymes and acids that mycelium produces are superb at breaking apart hydrocarbons. Oyster mushrooms gained national attention after the 2007 Cosco Busan oil spill, when nearly 60,000 gallons of fuel were dumped into San Francisco Bay. Clean-up workers successfully introduced oyster mushroom spores to help decompose the oil. And once oyster mushrooms run out of food, they die off and decompose naturally, posing no threat to the environment, according to the EPA. [1]

Meanwhile, here in north Brooklyn: “An estimated 17 to 30 million gallons of oil, benzene, naptha and other carcinogenic chemicals pollute a 55-acre, 25-foot-deep swath of soil in Greenpoint.” [2]

We therefore seek financial support for an oyster mushroom pilot project, to begin attempting as a community to mycoremediate the oil spill beneath us. We’d buy spore kits and related supplies, to generate a self-replenishing source of mushrooms for this purpose. We’d also seek volunteers to help plant various sites: people’s backyards, city parks, empty lots, the banks of Newtown Creek… We wish to be methodical, learn what works here and why. After this phase we’d ask Paul Stamets to advise us directly, as well as the city’s ecologists (who are already curious). We then would approach Exxon itself, who are obligated to further remediate the spill site.